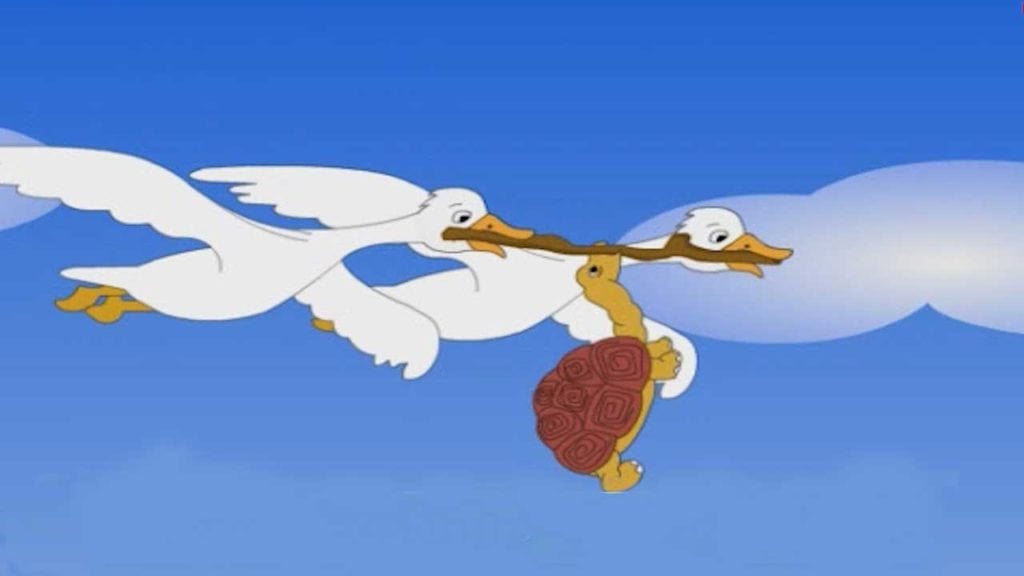 Once upon a time, a tortoise and two geese lived near a lake in a beautiful valley. For many years they lived harmoniously and became close friends. But the valley was struck by a bad drought, and the pond started to dry.

The animals and plant life near the lake started to die due to dehydration, and many animals began to look for a new place to live.

“ Soon, the lake will dry, and the valley will be unlivable. Therefore, we must seek a new home quickly”, said one of the geese.

The two geese flew around to find a new house. At last, they found another beautiful lake in a remote forest. The environment around the lake was perfect for them to live in.

They came back to the Tortoise and told him about the beautiful lake. The Tortoise got excited that the two geese found a new home but was saddened that he may never be able to travel the distance to survive the drought.

“I cannot fly like you,” said an upset tortoise. “I don’t know what I will do?”

The geese understood the Tortoise’s concerns and said, “Don’t worry, my friend, we have thought of an idea to transport you to the new place. But, for that, you need to promise us that you would not open your mouth, even a single time during the entire journey. Otherwise, you will be in instant danger of losing your life.”

“Have no fear, my friends,” replied the Tortoise, “I will be silent until you tell me to speak again. I would rather never open my mouth again than be left to die alone here in the dried-up pond.”

The Geese brought a stout stick and asked the Tortoise to grasp it firmly by his mouth. Then they took hold of the two ends and flew off with him. They traveled several miles in safety, and the Tortoise could have a bird’s eye view of the forest, hills and grasslands. Their course laid over a village. As the villagers saw this incredible sight of a Tortoise being carried by two Geese, they began to laugh and cry out. The children ran and followed them and started shouting, “Oh, look at the  funny sight of tortoise clinging to a stick.”

The Tortoise grew indignant and could not stand the jeering any longer. He opened his mouth to explain the situation to the children, but before he could say anything, he fell to the ground and was dashed to pieces. The two geese could not do anything to help their friend. They grieved their friend’s tragedy for a while and flew to their new home.

“Silence is the fence around wisdom” -German Quote.